My big orange kitteh has resumed her duties as the alarm clock with no snooze button.   Ginger girl is fond of her breakfast and can always be relied upon to wake me up at the crack of dawn.  So when she stopped waking me up as usual  I knew something was wrong. I actually missed my furry alarm clock. At first, I thought she had developed some sensitivity to her food.  So I tried changing her food. That helped, but only a little.   Stop reading now if you are easily grossed out.  You have been warned.

She was also having problems going to the litter box, she was straining outside it. Then  she stopped eating .  This was highly unusual. I was perplexed and worried.  Couple of visits by our wonderful home-visit vet confirmed what I had suspected. She had a blockage, which was causing severe constipation, which had developed into an obstipation. Poor thing, her plumbing was all blocked up. My guess was that the blockage was caused by ingesting fur,  since it had  happened the last two years after the spring thaw but had eventually resolved itself in a matter of days.

Oral laxatives, even an enema administered by the vet did not relieve the blockage.  I had taken to feeding her through syringes, since the vet was worried about her weight loss and did not want her to get hepatic lipidosis,  a condition that can be fatal if left untreated.  Furry girl had lost 4 pounds from her annual vet visit in mid February.

X-rays confirmed what we had guessed,  a huge chunk of stool was causing the obstipation.  The working hypothesis was that the blockage was caused by ingesting fur and the resultant stool had become too large and solid to pass through her digestive tract without external help.  The vet had to give her general anesthesia and physically extract the blockage.   That plus a week of giving her a stool softener twice a day and Laxatone once  a day, seems to have cleared all the back-up.

Ginger kitteh is back to her normal self, and the none the worse for wear.  Also, the weight loss during the ordeal has been  a blessing in disguise.  Since fat-bottomed girl was a hefty 21 pounds and needed to lose weight. 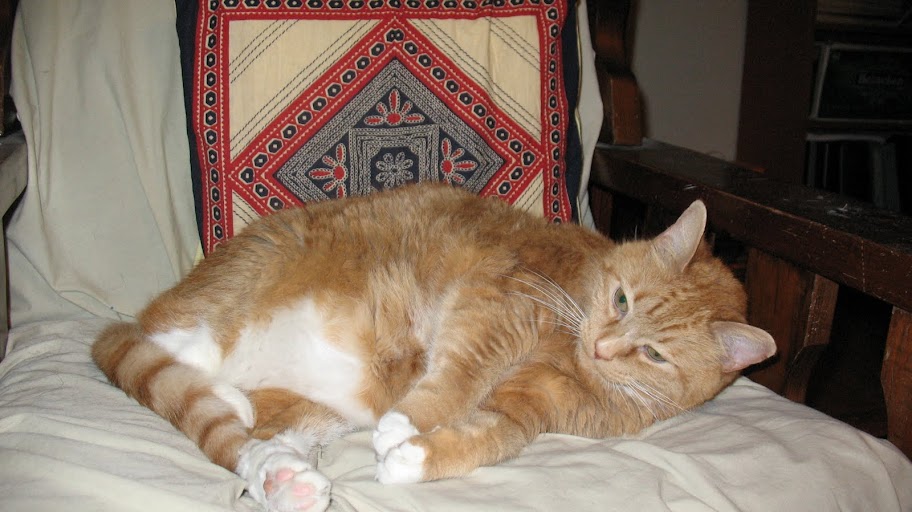