← I is in your Google
Citizen Rajan →

Glenn Hubbard wants a Constitutional Amendment to Balance the Budget

In his opinion piece, co-authored with Tim Kane, in the New York Times yesterday, Glenn Hubbard advocates the truly horrible idea of a constitutional amendment to balance the budget. That means he wants the government to respond to any economic challenge in the future with one hand tied behind its back and give up a powerful tool in setting fiscal policy.  Imagine what the outcome of World War II would have been without deficit financing or the Civil War for that matter?  The United States has used public debt to finance itself at many crucial junctures, in fact it was born in debt.  This curious fixation that Republican leaning economists and many Republican-lite centrists, I am looking at you Tom Friedman and Steve Rattner, have about debt and the deficit during Democratic administrations is curious to say the least. Where was Hubbard when George W. Bush was  whittling away the carefully built budget surplus by Bill Clinton or when Bush was starting wars without any plans of paying for them?  Was Hubbard concerned about the debt, penning sad and ominous sounding op-eds in the New York Times? No, he was working for the Bush Administration and was the architect of the Bush tax cuts which changed the budget surplus to a budget deficit in the first place.

Why is the current level of debt the biggest problem facing the United States? Hubbard doesn’t explain, except for invoking Admiral Mike Mullen, and Detroit.

TWO years ago, Adm. Mike Mullen, at the time the chairman of the Joint Chiefs of Staff, said that debt was the “single biggest threat to our national security” — not some rogue nation, or terrorist group, but debt. What makes the threat of exploding debt especially dangerous is that it’s not like a faucet that can be easily turned down. Federal, state and city governments in the United States have lost their fiscal grip, and the saga of Detroit’s bankruptcy is just one example.

In fact if you see the chart below, the debt has been at higher levels relative to the GDP. For example after WWII, the era that followed was a period of unprecedented  economic  expansion in the nation’s history. 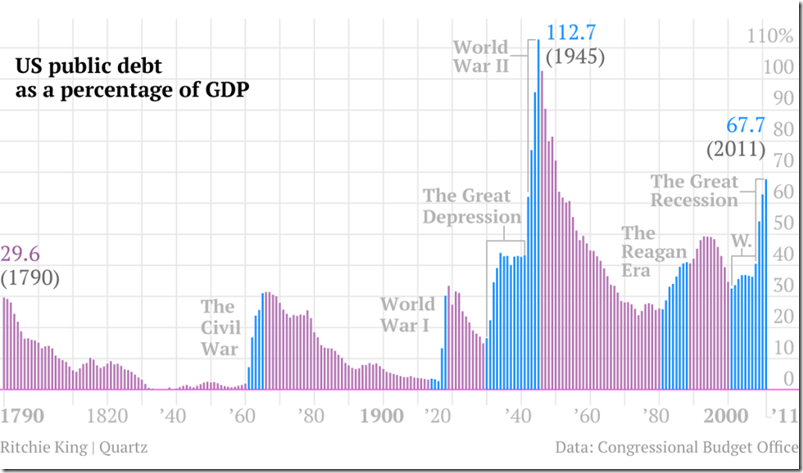 Since amendments to the constitution are extremely rare, this idea will hopefully die an early death. I think it may be the first salvo in the upcoming battle of raising the debt limit, the Congressional GOP will offer to raise the debt limit if the Democrats agree to a balanced budget amendment.  So lets see, taxes are evil, and  Hubbard and his ilk want no taxes, especially on the wealthy, government can’t use debt to finance itself so how exactly does the government function?

About Hubbard himself, why does this man have any credibility left . He was also consulting for Country Wide Financial, a major lender of the sub-prime loans and  one of the prime culprits behind the housing bubble for $1200/hr. He bought us the Bush tax-cuts, he is by his own admission an advocate of austerity led growth, which says that if you cut the government spending in a recession, economy will grow. This makes no sense because during a recession, when  businesses are holding back their  spending, if the government doesn’t ramp up its spending the economy will contract, not grow.

What should send chills down your spine is the knowledge that he will be making economic policy in any Republican Administration.

← I is in your Google
Citizen Rajan →