Somehow Dave must have managed to outwit HAL because there is another vacuous column under his byline this morning. If I am reading his column right, David Brooks seems to be yearning for a strong man,  a dictator.   He wants the President with expanded powers.

The democracy thing is too messy for Mr. Brooks.  As is his wont he tries to legitimize his spurious analysis by quoting a scholar.  Francis Fukuyama serves this function in this morning’s column.  Also, what is it with NYT columnists and their yearning for dictators, Tom Friedman is always praising the authoritarian governments of China and Singapore.  All  I can say is be careful what you wish for.

Bow before the Paw 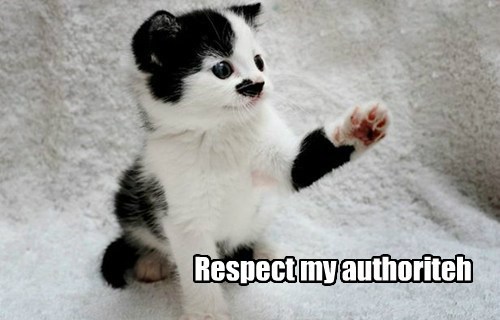 LoL by: two_kittehs (Picture by: SWNS)

The only Overlords I don’t mind are of the furry kind.

Budget Compromise and the Return of the Austerity Cat 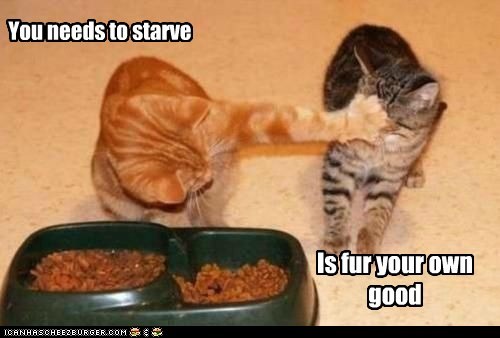 Steve Rattner has a sad because the current budget compromise is not austere enough for him. Won’t anyone think of the children, he says.

But unless we come to grips with the fiscal issue, we will be inflicting a huge financial burden on our children.

I suppose the hypothetical children would be happy to inherit a sputtering economy with rampant inequality and high percentages of unemployment. Give it a rest, Rattner.  Austerity does not promote growth and what we need right now is for the economy to grow. A healthy growing economy will take care of the twin problems of unemployment and deficit. Of course this may cause the gap between the 1% and the rest of us to get smaller, may be that is what Rattner and his buddies are most afraid of.

As for the budget compromise, it is too austere for my liking but it is definitely better than the government shutdown and the debt default battles of the recent past.

Humble Brooks not so Humble, Actually

David Brooks, the oh so humble  Uriah Heep of political columnists and faux anthropologist is back after a three month hiatus.  In his first column after the break he was afraid that we are sullying our beautiful minds with opinions about politics.

I figure that unless you are in the business of politics, covering it or columnizing about it, politics should take up maybe a tenth corner of a good citizen’s mind.

This week he is back to what he does best, faux social anthropology and throwing around jargon that he does not understand to sound smart.   He uses the libertarian economist Tyler Cowen’s book, Average is over, as a jumping off point, to come up with this gem;

So our challenge for the day is to think of exactly which mental abilities complement mechanized intelligence. Off the top of my head, I can think of a few mental types that will probably thrive in the years ahead.

Mechanized intelligence? what in HAL’s name is that? Do we have androids like Star Trek’s  Data running around ruling the world that no one has told me about?

BTW is it me or does Tyler Cowen’s book sound like something Tom Friedman would come up with? According to Cowen apparently 15% of the population will thrive in this neo-feudal economy.  I hate it when economists like Cowen make such pronouncements, like it is a divine decree without any evidence to back it up. What kind of an economy we will have depends on policy decisions not some law of nature no matter what economists such as Cowen like to pretend.  More than 30 years of gutting regulations and making policies that favor the investor class leads to the inequality that we have now, its not some law of nature.

Coming back to the column, Brooks makes up some meaningless categories, synthesizers, humanizers etc. etc.   When you read a couple of paragraphs you come to the realization that despite having taught a course in humility, Brooks does not have the humility to keep his trap shut about things he does not know much about.

ETA:  If I were David Brooks I would be afraid of mechanized intelligence!

Caturday Kitteh will Review Your Work

I can has Publication?

Better Just Keep Doing What You do Best 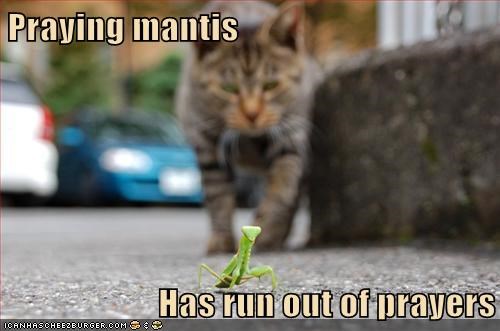 Update:  Praying Mantis also made it to the first page of ICHC yesterday! I hope his luck holds out against the kitteh.

Gravity, Stay the Hell Away From Me 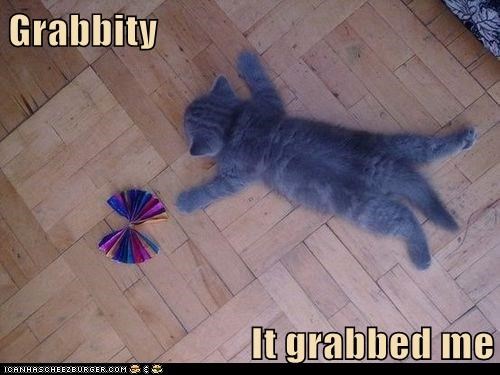 We saw Gravity in 3D, this Saturday. Despite getting some of the physics wrong, it grabbed me.  I am still thinking about it, today. Review to come, shortly.

When we had our friends from upstate NY over for a visit a couple of weeks ago, we were fortunate to  get a warm sunny day.   We decided to make use of this rare opportunity to go visit Historic Deerfield.  It was a particularly pretty November day, the trees had not shed all their leaves, it was cool but not cold and it was sunny.   Historic Deerfield is a living history museum.  It includes 11 period homes interspersed between  residences  and the  Deerfield Academy,  along the tree lined Old Main Street.  The houses are meticulously preserved with period details and furniture.  There are many self guided and directed tours.  Some of the treasures include silverware made by Paul Revere and a gun that was used in the battle of Bunker Hill.   We  managed to tour 5 of the houses. If you are in a hurry at least check out the Wells-Thorne House.  Each room in the house depicts a different period, you start the tour in a thread bare room from the Colonial period, when the town of Deerfield was new and struggling,  and end with a well appointed mid to late 19th century room with the best furnishings of the day. 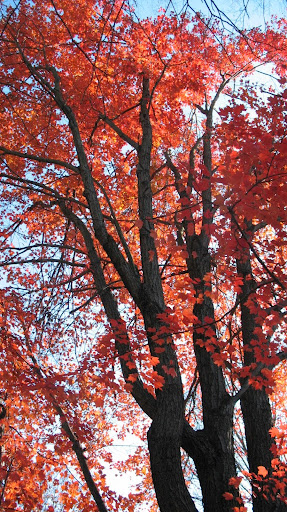