Eric Cantor lost to his primary challenger yesterday, so today Punditubbies of the Beltway media are out in full force trying to decipher what it all means.
After spending years convincing us how President Obama is responsible for everything they don’t like and how everything would be magically better if he just had a dinner date with the Republican leadership,they have suddenly awakened to the disarray among the Republicans. 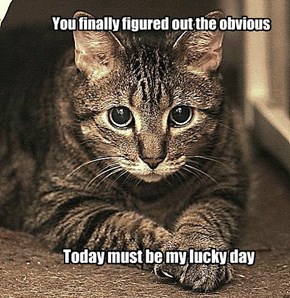 When will the Villagers also acknowledge the following:

I am not holding my breath.

ETA: As far as I know none of the major news media outlets had any idea that this would happen. How seriously should one take them when they don’t know what is happening in their own backyard.

Posted on June 11, 2014, in Cats, Politics and tagged Cantor, media. Bookmark the permalink. Leave a comment.