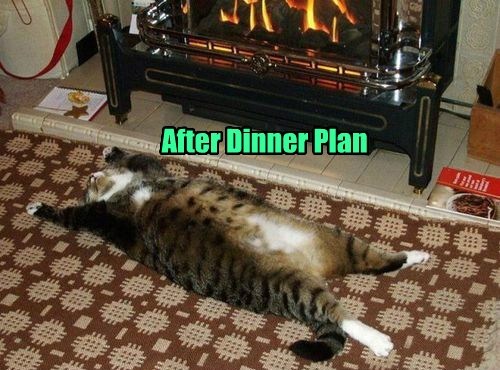 100 Years of the General Theory of Relativity 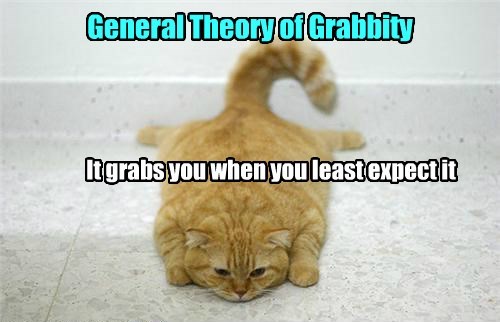 Einstein’s greatest achievement and one of the foremost intellectual achievements of all time completes a 100 years this year. If you think that you have no use for Einstein’s seminal theory, think again. The accuracy of the  ubiquitous navigations systems that depend on the Global Positioning System rely on special and general relativistic corrections to Newton’s Laws.

The Story Behind Schroedinger’s Cat 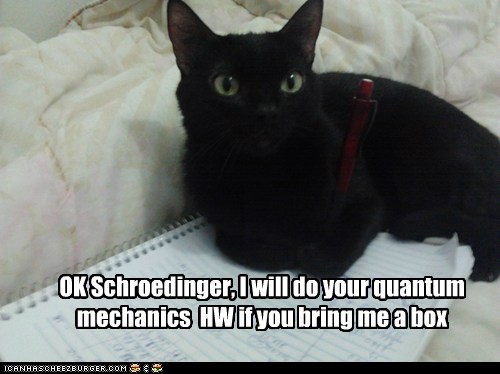 Box Kitteh is Not Happy With Your Offering 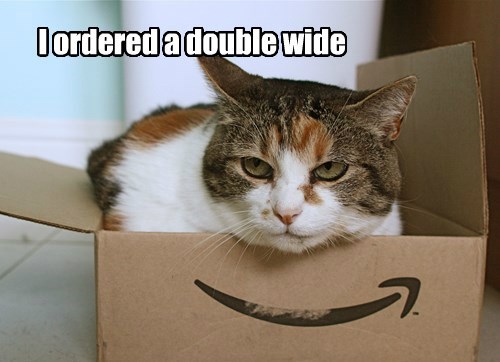 Update: I just realized that I have already posted this lol before. To make up for that lapse, I give you another box kitteh!

Pinga From the Upcoming Movie Bajirao Mastani is A Hot Mess

After the energetic Gajanana and the visually decadent Deewani Mastani, two songs from Sanjay Leela Bhansali’s upcoming movie Bajirao Mastani, I was expecting a hat trick from SLB. However, the much hyped dance-off between the two female leads is a dud.  It didn’t float my boat. Here in no particular order is a list of my critiques.

1. If two women love the same man, the last thing they want to do is dance together. This premise stretched credulity even the first time Bhansali attempted it in Devdas.

2. Whatever this dance is, it is not pinga.  (pinga ghalene : to spin around)

3. Lame choreography is lame, mishmash of the dancing styles doesn’t quite gel.

7. Where is the Gauri? Isn’t this supposed to be a Gauri celebration? Which is presumably why these women are dancing in the first place. This to me looks like a Gauri or Mangla-Gauri jagran or all nighter, which is primarily a huge sleepover party for women where they get together, gossip, sing songs, dance etc.  This is usually an female affair, by women and for women, and men are not welcome.

9. Deepika Padukone and Priyanka Chopra have nothing on goddess Madhuri when it comes to dancing abilities.

10. Is it my imagination or does the pattern on this dance floor resemble the one in Chandramukhi’s parlor? SLB we expect better from you, stop being so repetitive.

Deepika and Priyanka pretending to put sindoor in their hair part in a still from Pinga (Credit :NDTV)

Who Is the Bird Brain now?

Canary Got the Cat 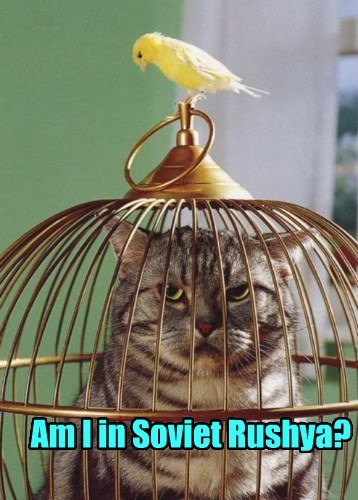 Ohai, this lol made it to the first page of Animal Capshuns on ICHC last week. Other FP lols is here. Looks like Friday kitteh has run out of happy. Has a good weekend everyone.

Bihar gives India a Diwali Gift: An In-Depth Analysis of the Assembly Elections

The results of the Bihar Assembly elections are in, and Prime Minister Narendra Modi’s Bharatiya Janata Party (BJP) has received quite a drubbing. BJP led alliance has won less than one third (58) of the total seats (243).  Mr. Modi and his handpicked party chief Mr. Amit Shah in their infinite wisdom had made the election all about Mr. Modi. BJP had no  candidate for the chief minister’s post and they had also benched popular Bihari politicians from the BJP from active campaigning while BJP’s opposition coalesced into one group.

Fresh elections became necessary because the incumbent chief minister Mr. Nitish Kumar’s decided to withdraw from the coalition with BJP — he could not stomach Mr Modi as the candidate for PM. Nitish Kumar knew that he could not win the fight alone so he formed an alliance with Lalu Prasad Yadav and the Congress. Lalu as Mr. Prasad is affectionately known took the fight to Modi and his chamchas (rough translation: cronies). Yes, Lalu is  no saint and has a checkered past and few fans in the Indian English language media but he is a fighter and gave as good as he got. His Twitter feed is a hoot. He also had a home field advantage and rhetorically he can run rings around Mr. Modi in Hindi, which is not Mr. Modi’s first language.

Another inexplicable BJP campaign strategy was to berate Biharis and Bihar. If there is  one thing Indians can’t stand is a person from another state coming and giving them lectures and telling them to their face that they are stupid. The Bihari vs. Bahari (outsider) issue got lots of traction. This is BJP’s second loss in the Hindi heartland. BJP stalwarts from the Atal Bihari Vajpayee cabinet like Mr. Arun Shourie and Yashwant Sinha have been among the biggest critics of these tactics.

Mr. Modi was sworn in as the Prime Minister of India just last year. His party won an outright majority to the lower House of the Indian Parliament. This was the first time in almost thirty years that any party had managed this feat. Mr. Modi ran on an agenda of economic reform and job growth.  BJP also won state assembly elections in Maharashtra, Jharkhand and Haryana shortly after. So why did it all go south for Mr. Modi in such a short time?

The Backdrop to the Recent Elections

Was this drubbing inevitable and how does one explain this in light of the Modi wave of 2014? The answer is simple, the mandate was for economic development, more jobs better infrastructure etc not to enact Sangh hobby horses like banning beef consumption. However, instead of focusing on an agenda of economic development, BJP governments at the state level started enacting bans against consumption and sale of beef. These bans have given a license to bullies to harass those whose livelihood depends on beef. The lynching of a Muslim man in Dadri, Uttar Pradesh is the result same phenomena carried to its logical horrific end.

Then there was the assassination of Prof. M. M. Kalburgi in Karnataka, latest in the string of politically motivated assassinations of the outspoken critics of the version of Hinduism the Sangh champions. The modus operandi of the so called protectors of Hinduism is pretty simple. They try to silence the people who criticize them by calling them names and kill those who won’t be silenced. What do Modi and the BJP have to do with all this?

I blame them for enabling the ugliness and the prejudices that already exists to come to fore and be expressed without fear of any repercussions in  the public square. Just last week BJP spokesperson said this about the beloved and the most popular Indian actor of his generation, Shahrukh Khan

Shah Rukh Khan may live in India but his heart belongs to Pakistan. Although, his films make millions here but he dares call India intolerant.

He then went on to call him a traitor.  All this abuse because Shahrukh Khan added his voice to the chorus of other creative professionals who had expressed concern about the growing intolerance to opposing view points in Modi’s India. However, none else got called a traitor other than Shahrukh.

Amit Shah the head of the BJP had this to say at an election rally in Bihar, said that if his party lost in Bihar,

crackers will be burst in Pakistan.

The toxic ideology of Hindutva and divisive tactics give cover to the reactionaries who perpetrate acts like the assassinating Prof. Kalburgi and give rise to a chilling atmosphere meant to silence the critics of their radical agenda. Many eminent writers were dismayed by this trend that they started returning their Sahitya Akademi (Indian Academy of Arts and Letters) awards to register their protest against what they saw as a climate of rising intolerance. Prof. Kalburgi was a recipient of the prestigious award and the academy was silent about his death for weeks. Many other artists and scientists have also followed suit. So far 36 writers and poets have returned their awards.

The only way a country as diverse as India can survive and thrive, is to live and let live.  India is not a monolith and never has been. India has tremendous linguistic (more than 20 major languages spoken) diversity and it has been home to almost every religion practiced in the world. Not just Hinduism and Islam but also Judaism, Christianity and Zoroastrianism, not to mention Buddhism, Jainism and Sikhism. Also,  there is a lot of regional variation as to how Hinduism is practiced in India. It bears little resemblance to the Hindutva preached by the Sanghis (denizens of the Rashtriya Swayam Sevak Sangh or the National Volunteer Corps). Narendra Modi has deep roots in the RSS, he was an RSS pracharak (pracharak: propagandist/evangelist).

The roots of the Hindutva can be traced to back to the days of the British rule. India’s diversity was seen by many as the one of the main reasons why a handful of British could rule a vast subcontinent.  According to this school of thought, the British gained a foothold in India exploiting the differences that already existed.

Indian nationalists in the British era could be broadly divided into two groups,  one that celebrated the diversity as a strength not a weakness, while the other that thought of it as a weakness to be overcome. This group blamed all of India’s erst while troubles on the other and idolized a distant past when their community held the sway. The Congress and India took the first route while the Muslim League took the second, as their respective paths to independence. The ideology of Hindutva which the Sangh subscribes to, is a mirror image of the Muslim League’s ideology.

The Hindutva movement has  more in common with the fascist movements of the early 20th century in Europe rather than ancient India. Starting with their uniform of brown pants, right down to their salute. If you don’t believe me you can read the Sangh’s founding fathers and make up your own mind. The Sangh may don the mantle of the protector of all Hindus, but it is little more than a fascist cult where indoctrination begins early. These self appointed soldiers of Hinduism who presume to speak for all Hindus, take basic tenets that most (but not all) Hindus abide by and then use them as a wedge issue to create division and hatred. Take the issue in the news, consumption of beef. While it is true that many  Hindus don’t eat beef, most don’t care if someone else does. The Sangh’s vision for India is narrow and poorly imagined. They want homogeneity  and have little appreciation of the mosaic that is India. There is more to India than the Sangh’s mantra of, Hindu good and Muslim bad. India’s rich legacy belongs to all Indians, not just these self proclaimed and self righteous appropriators.

So when BJP got its first outright majority at the center it was not surprising that Modi did not rein in the crazies in the party.  In Sangh circles their thinking is not crazy at all but  mainstream. That’s why the election in Bihar was so important because it is going to be extremely difficult for the BJP and RSS brass to dismiss all of Bihar as liberals, pseudo-secularists, Marxists or Pakistan lovers or whatever epithet du jour the Sangh uses to bully those who don’t agree with their outlook.

The voters in Bihar have rejected the demagoguery  and for that I am thankful. It’s also a reminder to the Gujarati combine of Modi and Shah that rest of India is not as receptive as their home state of Gujarat to the cause of militant vegetarianism and the paranoid, Muslim baiting version of Hinduism. The mandate Mr. Modi received last year was for economic change, not a green signal to make India a Hindu theocracy based on the tenets cooked up by the Sangh.

This tale has a happy ending. The Modi-Shah combine lost Bihar and the voters of one of India’s poorest states took on the Narakasura* of religious bigotry and won.

*Yesterday was the first day of Diwali, also known as Naraka Chaturdashi, which celebrates Krishna’s victory over the rakshas (demon) Narakasura.