Sunday Kitteh Has Been Up To No Good 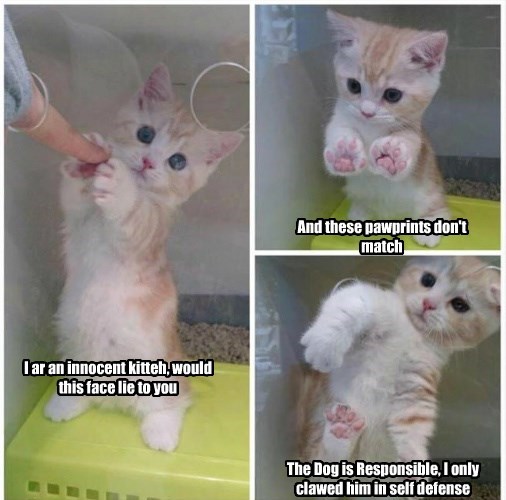 And I will Always Love You

The Curious Case of the Conservative Crush on Vladimir Putin

Before he sent troops to Crimea, and became the personification of evil, they loved his tough talking, gay bashing, bare chested swagger.

Pat Buchannan via the Atlantic

While his stance as a defender of traditional values has drawn the mockery of Western media and cultural elites, Putin is not wrong in saying that he can speak for much of mankind.

Putin is playing chess and I think we’re playing marbles

And the best for the last,  Victor Davis Hanson  of the National Review, via Balloon Juice,

Bare-chested Putin gallops his horses, poses with his tigers, and shoots his guns — what Obama dismisses as “tough-guy schtick.” Perhaps. But Putin is almost saying, “You have ten times the wealth and military power that I have, but I can neutralize you by my demonic personality alone.” Barack Obama, in his increasingly metrosexual golf get-ups and his prissy poses on the nation’s tony golf courses, wants to stay cool while playing a leisure sport. It reminds us of Stafford Cripps being played by Stalin during World War II. “Make no mistake about it” and “Let me be perfectly clear” lose every time. Obama’s subordinates violate the law by going after the communications of a Fox reporter’s parents; Putin himself threatens to cut off the testicles of a rude journalist.

That these same jokers have the temerity of calling anyone, least of all the President out of touch, is hilarious.