Three Reasons to Celebrate the 5th of September

1. Labor Day, to truly celebrate Labor Day government policies should not favor businesses that treat workers like expendable widgets.  This more than any other factor has contributed to the rising inequality.  What is good for Wall Street has not been good for Main Street.

2. Ganesh Chaturthi*, It is  start of the 10 day Ganesh celebrations. Bal Gangadhar Tilak, the leader of India’s freedom struggle before Gandhi, is credited with popularizing the annual Ganpati celebration,in the public square aka Sarvajanik Ganesh Utsav. Tilak tapped into the popularity and affection people felt for Ganesha  and harnessed it for grass roots organizing  and public meetings against the British rule. India won its freedom in 1947 but the  Ganesh festival in the public square still endures post independence.

3. Freddie Mercury gets a shooting star named after him on what would have been his 70th birthday. Like a shooting star leaping through the sky he graced our lives with unforgettable music.

*Chaturthi == 4th day of a fortnight. In the Hindu Lunar calendar, each month is made up two fortnights.

No Rest For the Weary Even on Labor Day

May Day, May Day We Has Run Out of Gooshie Fuds 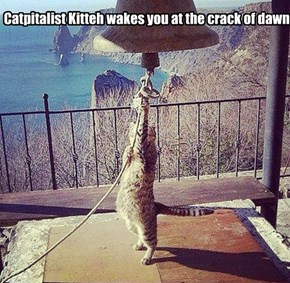 Have we turned a corner with regards to labor being valued compared to capital? One major change I see, is that the issues of income inequality and unfair labor practices are being discussed in the media and not shoved under the rug any more.  New York Times recently covered the practice of treating retail workers like widgets by subjecting them to just in time scheduling. Its not just retail workers whose work is not valued same is true in higher education where University Departments run on the labor of post-docs and adjuncts, while paying them a pittance.

I am glad that we are discussing these issues, it is but the first step and we still have a long way to go to before we get an actual change in policy.

No Reprieve even on Labor Day

Anyone owned by kittehs knows that this is no exaggeration.