Lavanya Sankaran is back on the Sunday opinion pages  of the NYT.  This time she is not opining about caste but about gender, in particular about Indian men, yes all of them, more than 500 million or so in number. Here are her profound insights, not all Indian men are rapists and some of them like babies. But beware of the rising tide of feral zombies,

Indian cities are awash with feral men, untethered from their distant villages, divorced from family and social structure, fighting poverty, exhausted, denied access to regular female companionship, adrift on powerful tides of alcohol and violent pornography, newly exposed to the smart young women of the cities, with their glistening jobs and clothes and casual independence — and not able to respond to any of it in a safe, civilized manner. This is the world of women under siege, the medieval world of the walking undead, the rise of the zombies, targeting females rich and poor. For women, at least, winter is coming.

Would it surprise you to know that the non-rapey, baby loving men come from her comfortably-off cohort while the feral ones come from the struggling millions?  In a column that is supposed to be a defense of Indian men, she condemns millions just because they are poor and make her uncomfortable and prick her bubble of privilege.

But when it is at its best, the results, in women’s lives, speak for themselves. If the image of the Indian female as victim is true, so, too, is its converse: the Indian woman who coexists as a strong survivor, as conqueror, as worshiped goddess made flesh. Indian women have served as prime minister and president. They head banks and large corporations. They are formidable politicians, religious heads, cultural icons, judges, athletes and even godmothers of crime.

Ms Sankaran’s anecdata about women not withstanding, this is a country where  a male child is preferred to the female. A  preference that knows no barriers of caste, class or region.   Check out the skewed gender ratios of Indian states, if you don’t believe me.  From birth to death it is a struggle to be a woman in India.  Female infanticide and sex selective abortion thrives in India.  As does chronic malnutrition, according to a recent UNICEF report, 36% of women are chronically  malnourished and 55% are anemic.

For his part, the Indian male, when nested in family and community, is part of a domestic tapestry that is intricately woven and vital, it seems, to his own sense of well-being. Take that away from him, hurl him away — and a possible result is a man unmoored, lost, adrift and, potentially, a danger to himself and to his world. Disconnection causes social disengagement and despair — and the behavior that is the product of alienation and despair.

The close knit family and social structure is not an undisguised blessing either,  it  keeps women tethered so that they don’t stray too far from the accepted norms, an example from last week’s NYT.    The inferior status of women in Indian society is nothing new and cannot be conveniently blamed on technological change or modernity. You can’t solve a problem if you don’t even acknowledge it.  Deep seated misogyny is a part of India’s DNA. The recent spate of reported sexual assaults is but one violent manifestation of this phenomena.  Ms Sankar analysis is superficial and vacuous and shies away from delving into uncomfortable truths.

I don’t know why I bother listening to you

The Die is Caste

NYT is now  outsourcing their  vacuous analysis on the Opinion Pages to op-ed contributors from Bangalore, no less.  Tom Friedman beware, your competition has arrived. Ms Sankaran’s column in a nutshell, nobody I know of speaks of uncomfortable stuff like caste or caste discrimination, ergo its no longer a relevant factor.  Also, it makes me sad that others, not as enlightened as I am, are using caste when deciding who to vote for. 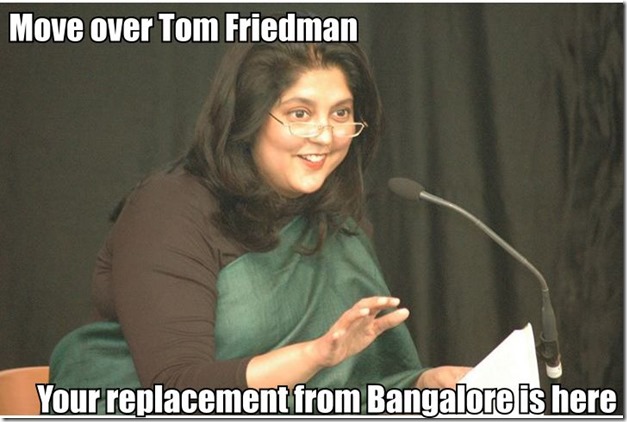 In a country where everything from your name to what you eat, to whom you can marry, depends on caste, I would be extremely surprised if it was not a dominant factor in electoral politics.  Her personal experiences are hardly representative of all of urban India. Perhaps she should actually talk to the the cooks and  gardeners she  refers to in her column before she presumes to speak for them.

In today’s urban India, this land of possibility, separated from rural India by cultural and economic chasms, it seems reactionary even to speak of caste. Certainly it shouldn’t — and usually doesn’t — come up at work or at play or in the apartment elevator.

A quick Google search with the  word caste, came up with multiple stories from Indian newspapers  with caste in the head lines.  Even when it is not in the headlines, caste provides the subtext for almost everything in India.  So much for her claim that newspaper headlines don’t obsess over caste anymore.  Even if explicit mentions of caste had disappeared from headlines in the English language newspapers what exactly is that supposed to prove?  Does it mean, that if something is not in headlines, it does not happen? Caste-based discrimination is the reality of life for far too many Indians.    Although, truly reprehensible practices around who you can touch and share food with may be dying out in the urban areas out of sheer necessity.  The opportunities that are available to you depend to a great extent on your caste.   Since caste and class usually go together, abject poverty is the fate of many at the bottom of the caste ladder.

The reality of the caste system in India is many layered and greatly differs from her simplistic Cliff notes variety description,

Traditionally, Indian society was divided into four main castes. At the top, Brahmins, as priests and teachers; second came the Kshatriyas, the warriors and rulers; third, Vaishyas, who were merchants; last, Shudras, the laborers. And below them all, the Dalits, or untouchables, called Harijans, or “children of God,” by Mahatma Gandhi (for indeed, who isn’t?).

You have all kinds of flexibility the higher up in the caste ladder you are, for example any profession is open to you if you are Brahmin, but not so, the lower on the ladder you are.  In addition there is a lot of regional variation in the caste hierarchies.

When Ms Sankaran, or any other upper caste Indian has a priest who is a scholar of Hindu scriptures but is not a Brahmin  officiate at a religious ceremony, I will buy her tall claim, that caste is irrelevant.  Also, if caste is irrelevant, why is every mention of Mayawati followed by her caste descriptor?

Politics is where caste has gotten a surprising new lease on life. After money and education,
democracy is, of course, the third powerful force transforming Indian society. But Indians, it turns
out, are passionate about the caste of their politicians. Nearly half of the voting population of even
a highly educated city like Bangalore considers caste to be the No. 1 reason to vote for a candidate.

To get a new lease on life, you need to be dead or dying, caste and caste based discrimination is alive and well in India and twenty years of relatively weak economic reforms have not done much to change that dynamic.  Politics is one arena where lower castes  can affect the outcome  due to their sheer numbers.  Like many urban Indians of her class she is not happy with the results.   By the way how exactly can a city be educated? Does it go to college?

Democracy gives power to people who previously had none. But, like race, caste can shift political
discussions from present-day merit to payback for historical injustices.

Shorter Ms Sankaran, those uppity Dalits are making me uncomfortable. Caste based injustices are hardly in some distant past to be described as historical.  But no matter, the lower castes should just get over it, according to Ms. Sankaran. Also,  merit and privilege go hand in hand. It is hard to excel at school when you don’t know where your next meal will come from.   She makes her biases crystal clear in her next paragraph

Six decades of democratic statehood have attempted to correct the imbalances of the past through
“reservation” — job and education quotas for the so-called backward castes, like the Dalits. This
program has been effective, in a fairly hit-or-miss fashion. Some say that nearly all university seats
are reserved for lower castes, effectively blocking Brahmins from higher education.

She ends with this gem

So that is the fascinating conundrum of Indian society: on one hand, caste is losing its virility as
India opens up opportunities and mind-sets, while on the other, the forces of democratic politics
ensure that it will thrive and never be forgotten as a crucial social index.

Caste is a male? Who knew? In any case, this male does not require Viagra. Tough luck Ms Sankaran, you can be rest assured that people will continue exercising their franchise in a way that protects their interests whether or not it meets your approval or hurts your tender feelings.  Caste based politics is a reality in Indian politics and it is not going away, unless the underlying issues of caste discrimination are addressed.   Politics in India is dirty and messy and caste-driven,  and reflects the society.

P.S.  Why  is NYT publishing this drivel?