Should the Fed tackle Income Inequality?

That is the question, the daily NYT trollfest, also known as Room for Debate, addressed yesterday. The Fed has two mandates, keeping the inflation in check and decreasing unemployment. Unfortunately for us, since the late 70s the Fed has taken its inflation mandate far more seriously than the unemployment one. Since inflation has not been a serious problem since the 70s, it is high time that the Fed addressed its neglected mandate. Doing so would go a long way in addressing the income inequality issue.

Our economy is consumer driven, so rising income equality shrinks the economy, because people have to  spend most of their income on necessities, leaving little for anything else.  Fed’s investor driven policies haven’t been particularly beneficial to the wellbeing  of the average consumer.  The rising tide hasn’t lifted all the boats, as promised.

Of all the respondents, I found Joseph Stiglitz’s answer most pertinent while Michael Strain,strained my credulity.  According to Strain, Fed should not address inequality because it is a partisan issue.  At least, he is honest, one party does not want to address issues that concern the 99%.

Well, who are you going to believe, a Nobel Laureate in economics or the resident scholar, at the American Enterprise Institute? One who David Brooks approvingly quotes and  has zero publications or citations in Google Scholar, that I could find.

You has questions; Econ Cat has answers 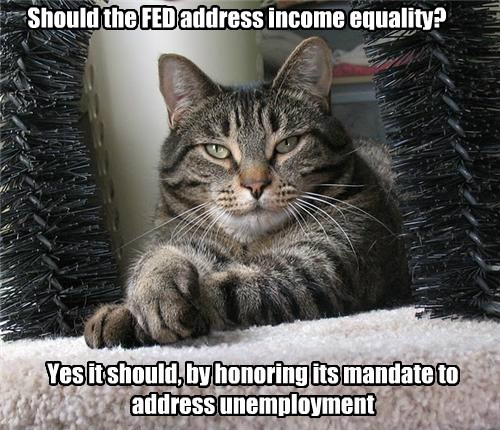