Are you ready? I hope feeding their kin at the crack of dawn  has put me in their good books!

Maureen Dowd has yet another column disparaging the President, this time for not going to Ferguson, MO. This is a third column in a row about the supposed inadequacies of President Obama. According to Dowd, the first African-American president has outsourced race.  Last column it was his playing golf that got MoDo going. She begrudges him his vacation and even his office and constantly echoes the right wing criticism about him. I am sure that had he gone to Ferguson, she would have found fault with that too, and would  blamed him for throwing gasoline on an already volatile situation.

In MoDoverse, every problem can be traced to Obama’s actions or the  lack of thereof,  from the Republican intransigence to ISIS and everything in between.  If only Obama would schmooze with Congressional Republicans, yes the same ones who even refuse invitations to state dinners,  give an electrifying speech on every occasion, we would all live happily ever after.  In this fantasy land a presidential speech would solve the immigration problem and  fix race relations.  Of course, it was not that long ago when Obama’s speeches were characterized as just words.  Her other scintillating advice to the President;  is to be more like President Bartlett of the TV show West Wing.

At this point, MoDo seems to be just phoning it in, with  utterly predictable columns castigating Obama for not doing something that she deems a President ought to do, you know, what Jeb Bartlett would have done. Hey it worked on the West Wing, so why not try it in real life?

On August 15, 1947,  67 years ago while the world slept, India awoke to a new beginning, or in the immortal words of Jawaharlal Nehru, its tryst with destiny.

Long years ago we made a tryst with destiny, and now the time comes when we shall redeem our pledge, not wholly or in full measure, but very substantially. At the stroke of the midnight hour, when the world sleeps, India will awake to life and freedom. A moment comes, which comes but rarely in history, when we step out from the old to the new, when an age ends, and when the soul of a nation, long suppressed, finds utterance.

It is fitting that at this solemn moment we take the pledge of dedication to the service of India and her people and to the still larger cause of humanity.

At the dawn of history India started on her unending quest, and trackless centuries which are filled with her striving and the grandeur of her success and her failures. Through good and ill fortune alike she has never lost sight of that quest or forgotten the ideals which gave her strength. We end today a period of ill fortune and India discovers herself again.

The achievement we celebrate today is but a step, an opening of opportunity, to the greater triumphs and achievements that await us. Are we brave enough and wise enough to grasp this opportunity and accept the challenge of the future?

Freedom and power bring responsibility. The responsibility rests upon this assembly, a sovereign body representing the sovereign people of India. Before the birth of freedom we have endured all the pains of labour and our hearts are heavy with the memory of this sorrow. Some of those pains continue even now. Nevertheless, the past is over and it is the future that beckons to us now.

That future is not one of ease or resting but of incessant striving so that we might fulfill the pledges we have so often taken and the one we shall take today. The service of India means the service of the millions who suffer. It means the ending of poverty and ignorance and disease and inequality of opportunity.

The ambition of the greatest man of our generation has been to wipe every tear from every eye. That may be beyond us, but as long as there are tears and suffering, so long our work will not be over.

The birth of the Indian nation was traumatic and joyful at the same time and in many ways India is still coping with the PTSD associated with the Partition that followed the independence.

Were it not for Prime Minister Nehru and his cohorts, India could have easily ended up like Pakistan instead of the democracy it is now.  Unity in  diversity became India’s motto replacing the divide and conquer strategy practiced masterfully by the colonial masters.  There are few countries in the world as diverse as India, in terms of both languages spoken and the religions practiced.  In light of countries splitting across ethnic and religious lines as we speak, the Indian experiment seems almost like an anomaly.

Stressing what bound Indians together rather than what separated them in those early years is what kept India united and viable. In some ways  its truly a miracle, because the fault lines that divide India are too many to count. Although it is majority Hindu, it has the second largest Muslim population in the world, second only to Indonesia. There are  nineteen languages on an Indian currency note, and for many if not most Indians, their regional and  linguistic identity supersedes the national identity. Focusing on what binds Indians together therefore not just noble but also politic.

Jawaharlal Nehru was not unique though, instead he followed the lead of the previous leaders of the Indian National Congress, Mohandas Gandhi and Bal Gangadhar Tilak. Both Tilak and Gandhi formed alliances beyond narrow regional, caste and religious divides during India’s struggle for Independence.  Here is hoping that this tradition  continues as India navigates the twenty first century. 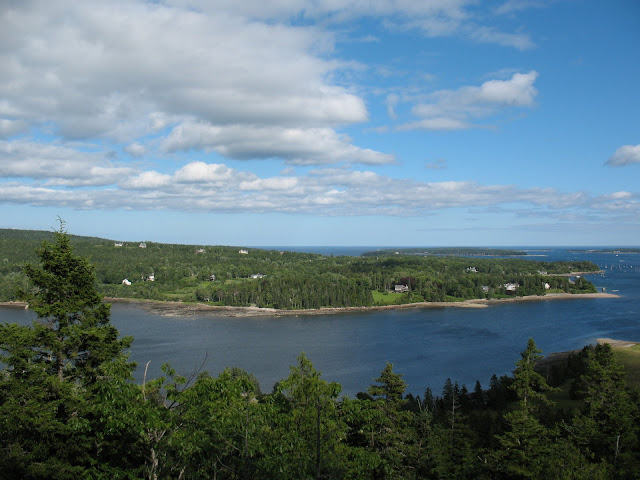 Scenic overlook on the way to Monterey, California, on  the Pacific Coast Highway

I can sit for endless hours watching the waves crash on the shore, doing absolutely nothing.  I took the first photo on my visit to Acadia in 2009 and the second photo is from last week.

Cruzing for a Bruising?

Ted Cruz and the crazy threesome ( Representatives Michelle Bachmann, Louie Gohmert and Steve King)  are driving the GOP immigration policy now.  The  Republican House passed two bills, one to deny due process to the child migrants from Central America and another one to deport the beneficiaries of the  Deferred Action for Childhood Arrivals or DACA.  Nate Cohn writing for the Times 538 wannabe, Upshot has piped in to let us know that this declaration of hate is not a big deal at all because only one state with a Senate election  this November has a sizable Hispanic population. Yes, indeed why should anyone except Hispanics be bothered about this latest turn of events because the short sighted mean spiritedness displayed by the current GOP officeholders is not going to affect them at all, right? Wrong, the list of people and groups that are in the GOP cross hairs are numerous and by no means restricted to immigrants legal or otherwise.  In fact, even something as non-controversial as promoting basic science is enough to earn you the ire of the right wing media, these days.

I remember that there was a time not that long ago, when the DREAM act which provided a path to legalization for  out of status individuals who had been brought to the United States as minors had bipartisan support and Republican sponsors.

I think that Cohn is wrong and that GOP will pay a price at the polls, but if it doesn’t, I lay at least part of the blame at the door of the  media including New York Times, which has been asleep at the switch while covering Republican intransigence and its effects.  Focusing instead  on convincing the readers how everything from Russia’s incursion in Ukraine to Israel’s latest actions in Gaza to the Republican clamoring for impeachment, is all President Obama’s  fault.

The Answer is No, unless you are Cuban

Bar Keep, I will has two.